I spent ages convincing Murad to go on this journey but there was always something happening (considering that we are on a tight schedule even during public holidays.) Somehow all of a sudden we managed to squeeze out 8 days for a getaway.

I knew that our friends were planning to go to Cambodia and Myanmar (Burma) so I instantly took a decision to join them for the New Year’s celebration in one of these exquisite places.

The schedule was quite intense. First, out yogi friend showed us the most interesting places. Can’t say the word ‘interesting’ can fully describe the breathtaking beauty, which was surrounding us. I’m not only talking about the beauty of the place itself, but about its historical value, architecture, nature and its mysterious spirit.

On the 29th of December we set off to Bangkok. There are no direct flights between Russia and Cambodia, so if you are flying from Russia, patience is what you will probably need the most. After the last change we were only one hour away from our final destination. I spent the whole hour glued to the window because the view outside was bewitching.

Finally we landed at the airport of Seam Reap. Going through the customs we found out that the staff might ask you for money. But this is nothing to do with any legal fee collection you have to pay. It’s just one of the illegal ways of making money right at the airport. Another advice I have for you is to make sure you get your visa electronically before coming to the country, or you may end up queuing for a couple of hours to get one at the airport. Despite the airport is very modern and comfortable the queues to get a visa are very big. 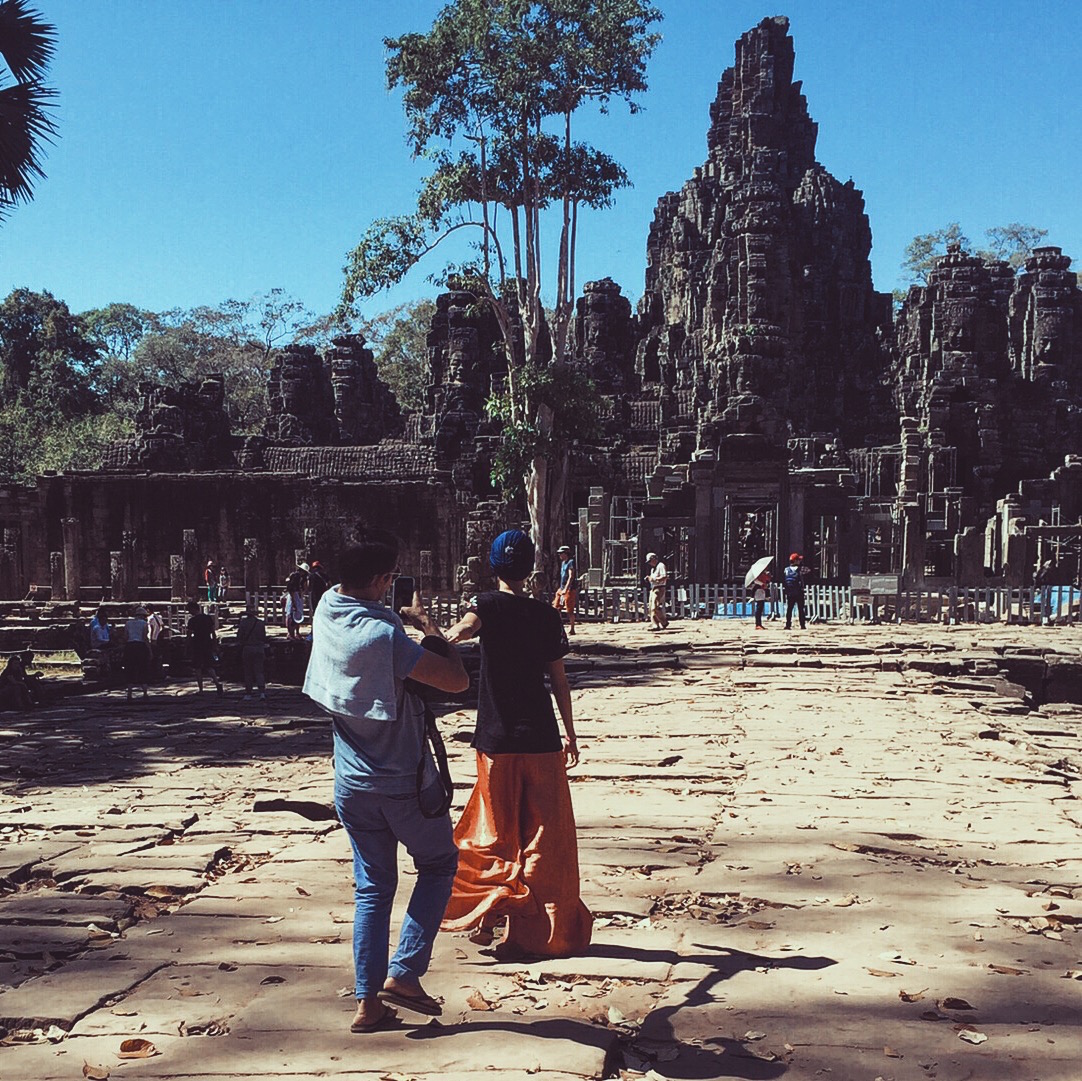 We took a taxi and headed to the hotel where our friends were waiting for us already. You will find out that bikes is very popular way of transportation in Seam Reap as well as in the rest of Asia. My friends told me that life has dramatically changed in the last three years thanks to blooming tourist business. There were a lot of new hotels and cafes built which has never happened before. We haven’t found Cambodia a very dirty place comparing to India. Just make sure you don’t set you expectations very high and don’t expect to see the service and clearness of Switzerland when you come here. In that case you will have a chance to admire the beauty of the country. Never set expectations and stay open-minded doesn’t matter where you go.

We only had three days in Seam Reap and a very intensive programme to fulfill.

On the 31st of December from the very morning we started from visiting the waterfall Phnom Kulen. There were a lot of local people enjoying their picnics next to it. The waterfall was not very big, and probably was not the most beautiful I had ever seen. But it was something special about it. Make sure you stand in the flowing waters on the top of the waterfall and feel the element and the power of the stream. 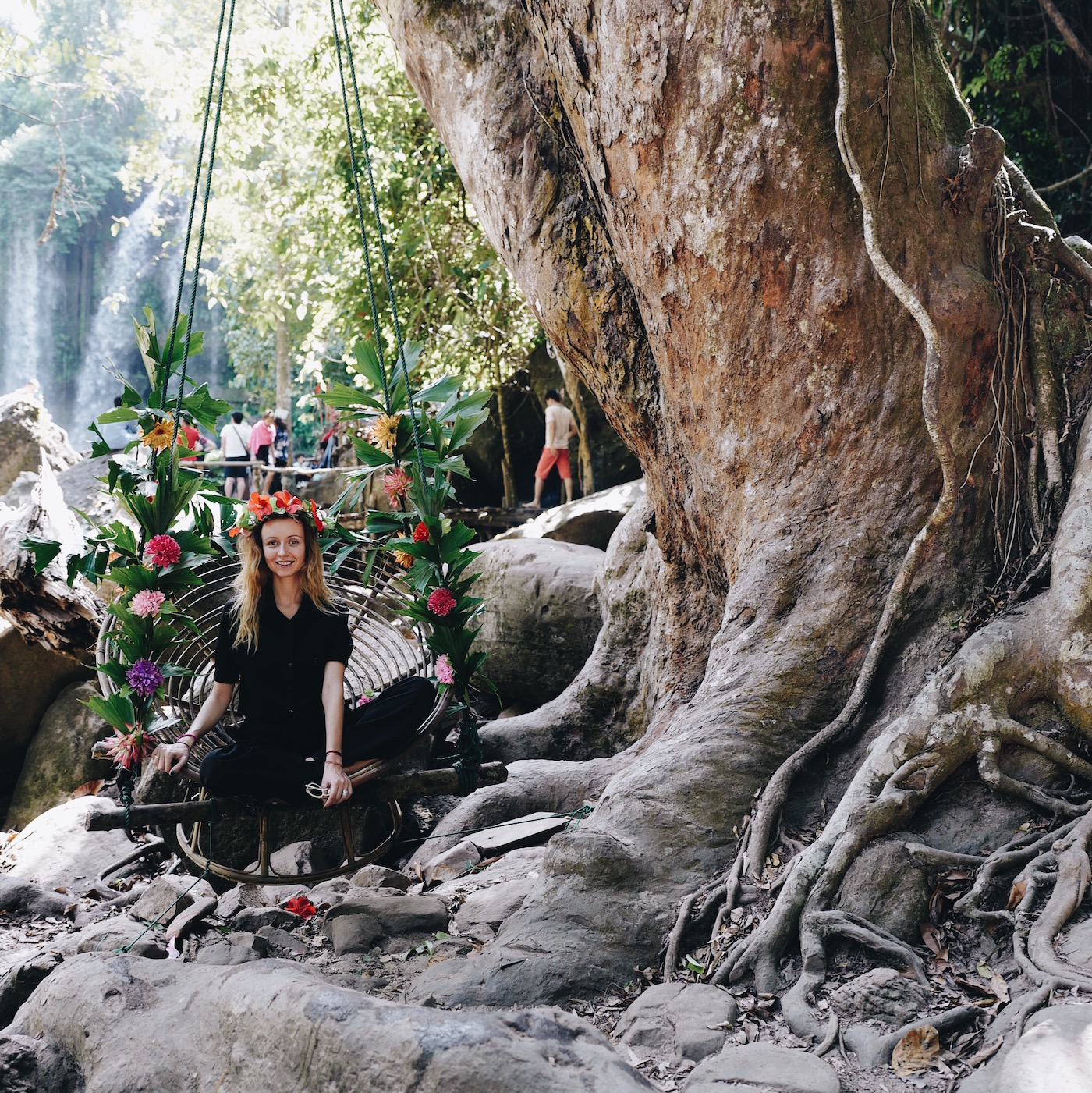 After that, we visited the temple of Buddha where for the first time in my life I saw lotus flowers on sale. Actually my attitude to this flower is very special and mysterious. We prayed with the monks and had a look from the top of the park where the monastery was located. 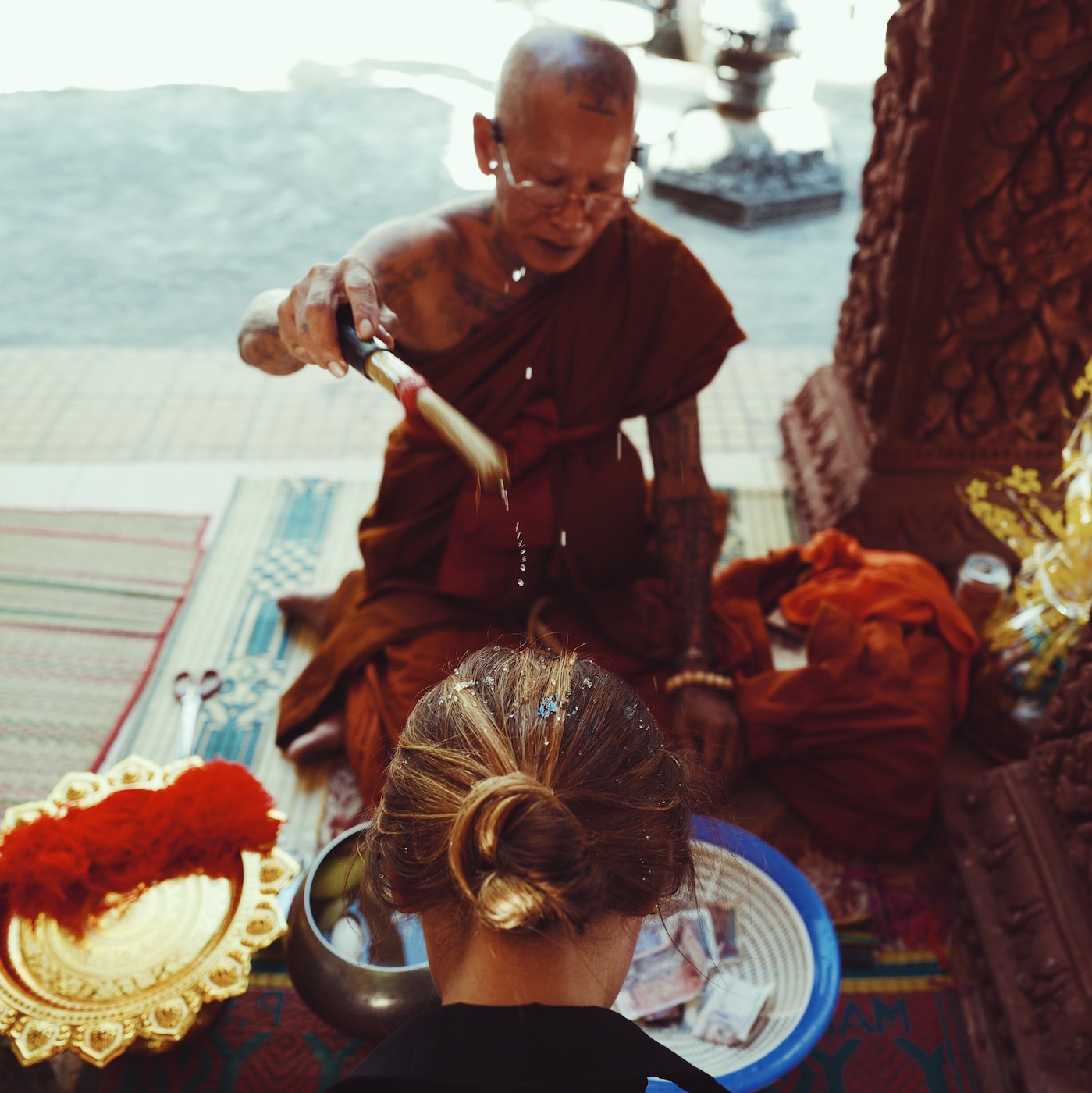 We had a very special evening planned to celebrate New Year. We booked a table in a nice restaurant, which was opened by a Frenchman some time ago, and started preparations for the celebration. The whole central street of Siem Real was full with hundreds of tourists waiting for the midnight. For us the dinner in a nice restaurant and the celebration weren’t so much important. We went to bed soon after 12am.

By 4 o’clock in the morning we were wide awake and a half an hour later we were already heading to the one of the most magnificent temple complexes in the world that I had ever seen – Angkor Wat. Right now while I am writing this text, the image of the dark shape of this mysterious building in the night arises in my mind, it was light up with a brilliant moonlight radiating it with even more poetry. We reached it by tuktuks (the same as in Thailand it is the main kind of taxi in Cambodia). 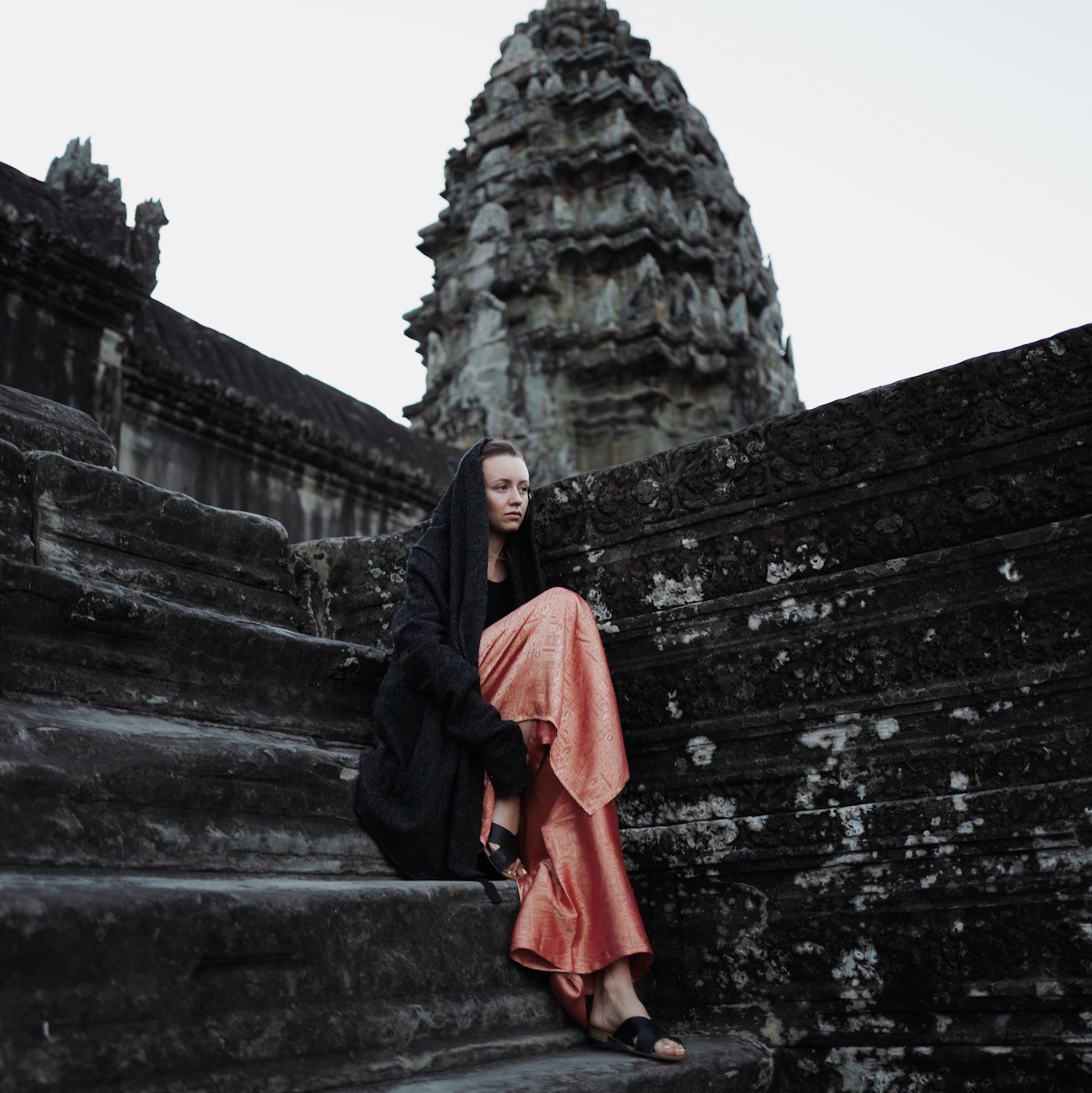 And now a little bit of Angkor Wat’s history. According to Wikipedia, Angkor Wat was constructed in the 11th century; by the 15th century it was completely forgotten and abandoned, and in the 19th century it was revived thanks to some scientists and travelers from Europe. There was a giant moat around the whole complex. Nowadays the temple is a site of UNESCO and is one of the most significant cultural constructions in the world. There are hundreds of legends and made-up stories about this place; guides tell myths, scientists try to find scientific explanations about how this complex could be constructed without any binding substance, and all the stones are so smooth that it seems as if they were being polished for a long time. I am not even mentioning the fact that there is not even a one-millimeter gap between the blocks. It is an amazing place, and inside it there are two ponds that are daily visited by hundreds of tourists, who come to meet the dawn and leave with the sunset. The strange thing is that contrary to all the rules of physics the whole temple is reflected in these ponds. 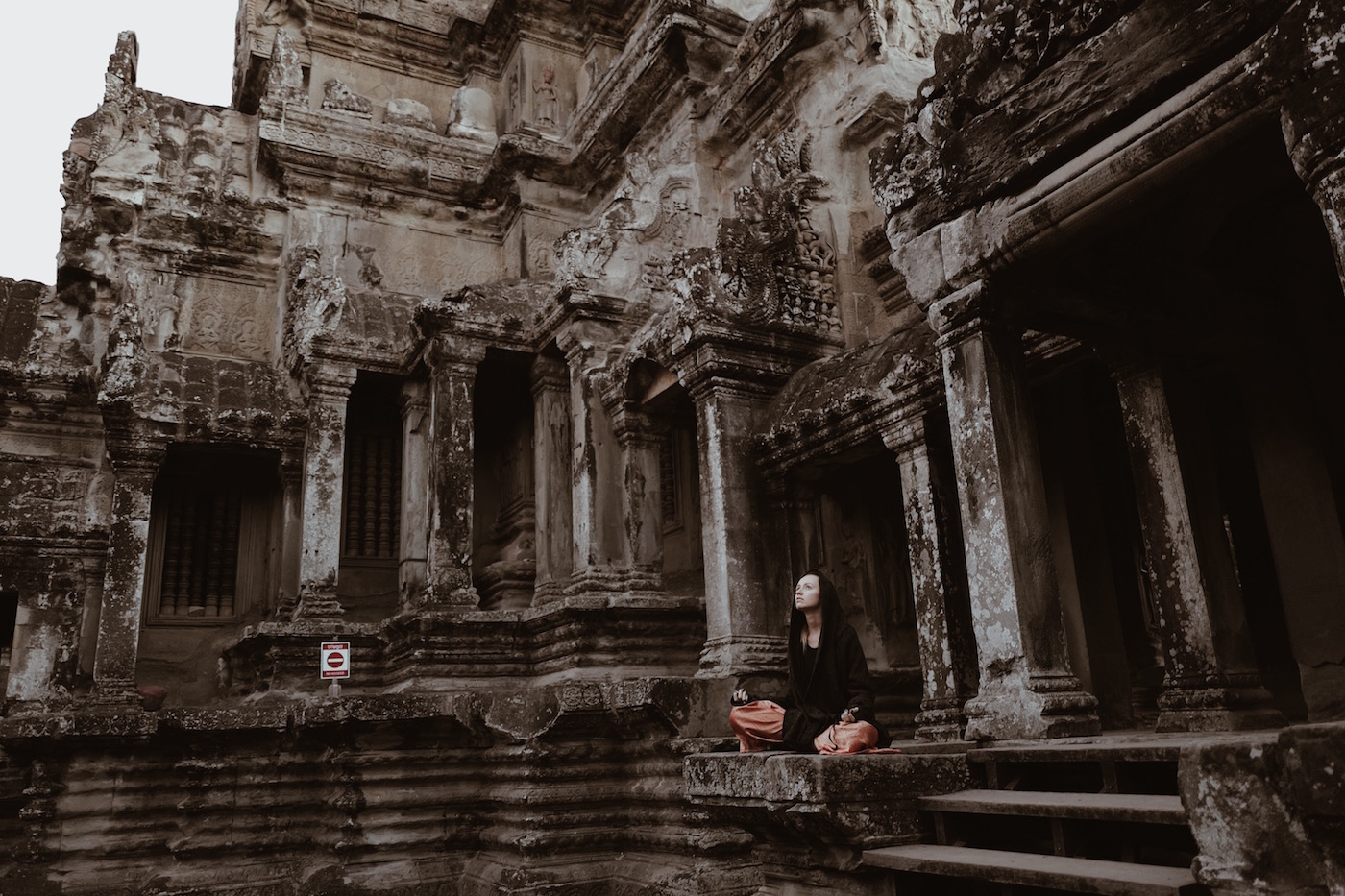 Finally we reached the temple complex. There was only one bridge to cross and we were there. By the way, for you to understand the scale better I will give you some measurements: the gross area of Angkor Wat is 200 ha. It includes the moat (190 meters wide), the park and the construction itself (1500x1300 m).

The locals admit that each circle of the temple in Angkor Wat corresponds with a particular chakra, and when you are passing a circle you get the to the core of one of the chakra and understand it’s meaning. But we had a reason of visiting this place on New Years day. We didn’t want to stand next to the pond waiting for the sunrise – we reached the very heart of the temple to meet the dawn there and to meditate. To say that it was the most unforgettable 1st of January is to say nothing. My dream is to return to this place and to be able to touch the grand Angkor one more time. 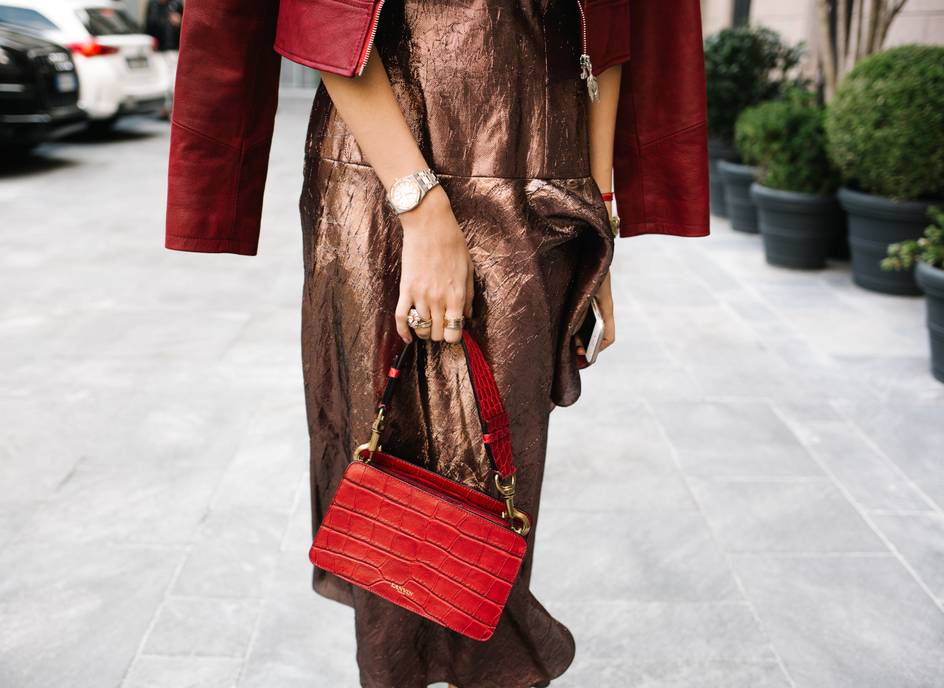 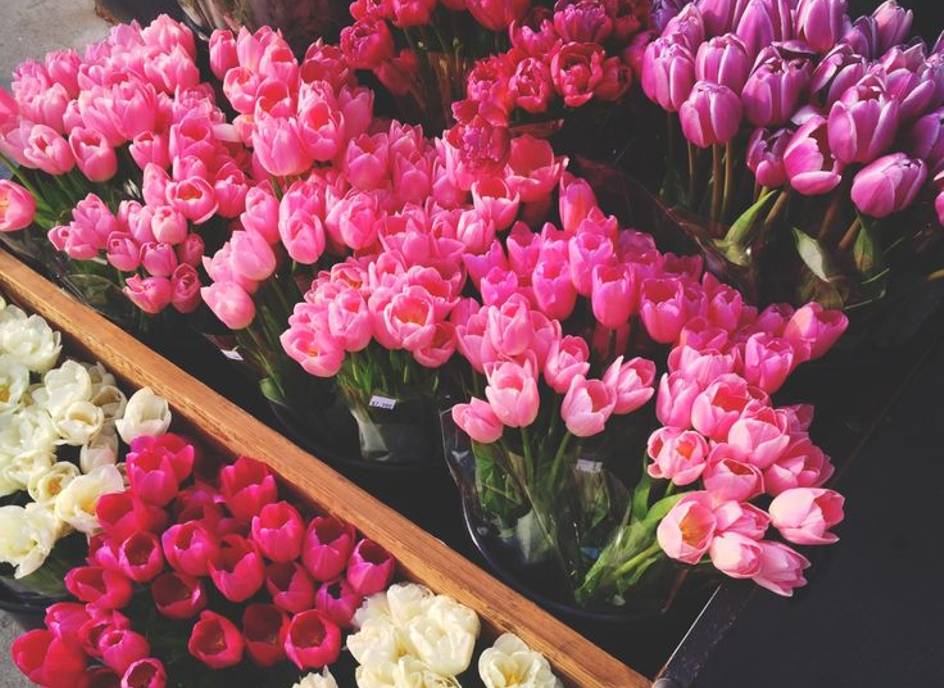