The city of Angels is an unstoppable force built upon multiple cultures, religions, customs and an incredible history that charges the air and those sun burnt hills like pure electricity. If you had to pick one thing, one philosophy that connects it all – graffiti would most certainly be the one. Through it you can not only feel the city’s heartbeat, you can truly see it in all of its colourful glory. The streets of L.A. live and breathe; just like any artist they can be buzzing with joy at one moment and at the next corner you might find yourself in the arms of a very different, quieter, sometimes even mysterious atmosphere. I will guide you through both the brightest and the darkest parts of this free-spirited city. 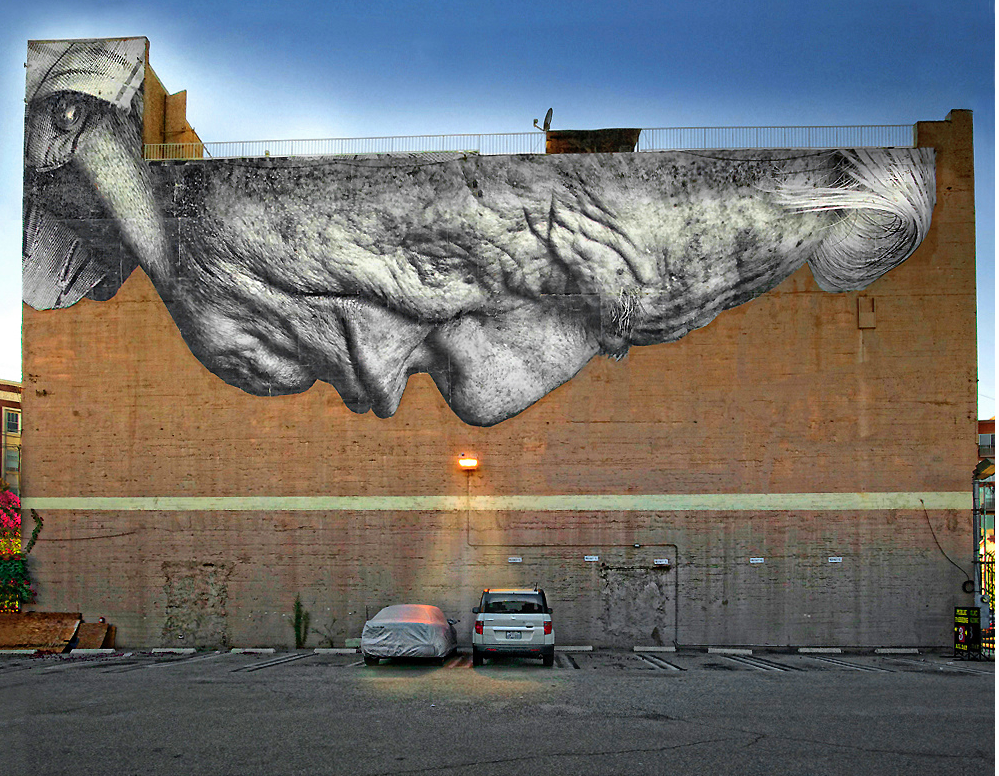 The Arts District is the perfect starting point for your immersion into this mind blowing, sun soaked world of L.A.’s street art. Right in the middle of the downtown cement garden, filled with skyscrapers overgrown like weeds, lays the most creative and visually impactful district of the city. Parking lots, empty facades of both abandoned and occupied buildings, tiny liquor stores, shopping malls, old factories that were transformed into luxurious lofts, schools and churches – nothing is off limits, everything becomes a blank canvas in the eyes of an artist. Here you’ll meet hauntingly large and extremely slim faces of melancholic animals created by a Belgian artist ROA; come face to face with a crocheting gang of Mexican abuelas (they belong to a New Yorker Swoon); and those creepy clowns crying colourful tears, conjured by Anthony Lister, might even give you a shiver or two. Wherever you go, whichever way you look, you will be slammed with a variety of clashing styles, colours, textures and ideas. The desire to see everything, to go left and right, and literally leave no stone unturned in the hopes of finding some secretly hidden piece of art, this desire might drive you a little mad but it will be the sweetest, most lustful madness you’ve ever experienced. 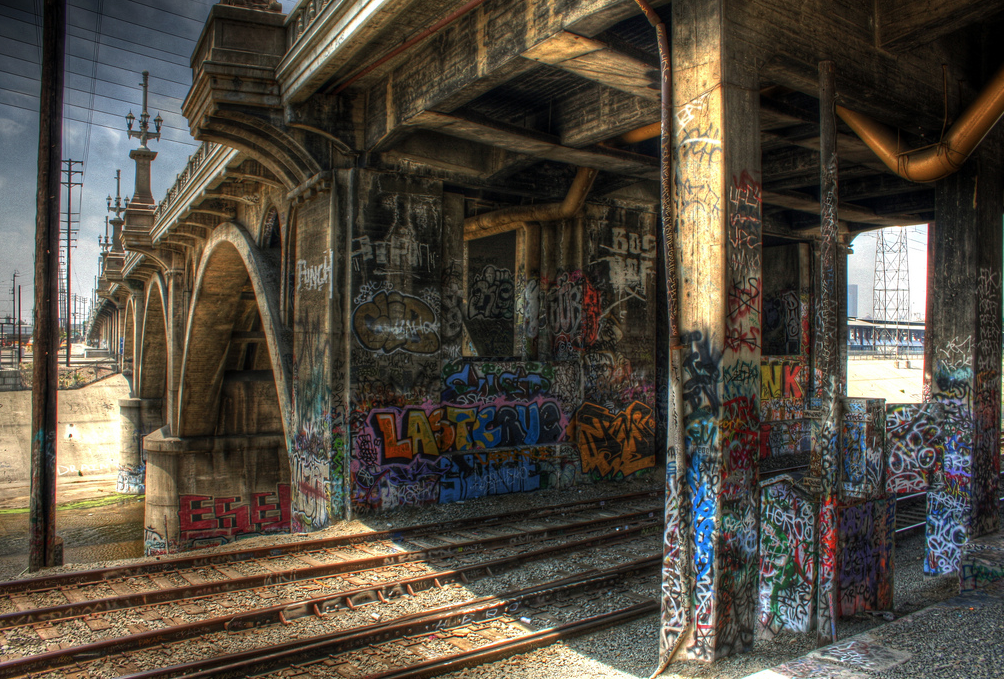 There is nothing particularly outstanding about this very typically urban, polluted, grey, unkempt river that flows through the whole city. At one point the river was paved and became known as the “Concrete River”. It became a beloved location amongst many famous directors. Blockbusters and cult classics like Grease, Terminator, or Gone in 60 seconds were filmed right in the river’s bed. In the most recent years there has been a talk of turning back the time and making it a real, living, water filled river. In a meantime it is also a location marked by a street art movement. If you are willing to spend a little more time and effort, check out the bridges that cross the river, for instance, the 4th Street Bridge. It is worth mentioning though that you should probably have someone local to show you around, as it is not the safest location for a lone, wide-eyed tourist. Of course, you can always seek out a more professional kind of help. Grafftours is one of the companies that organize well-planned, extensive graffiti tours (you can register online at www.grafftours.com). 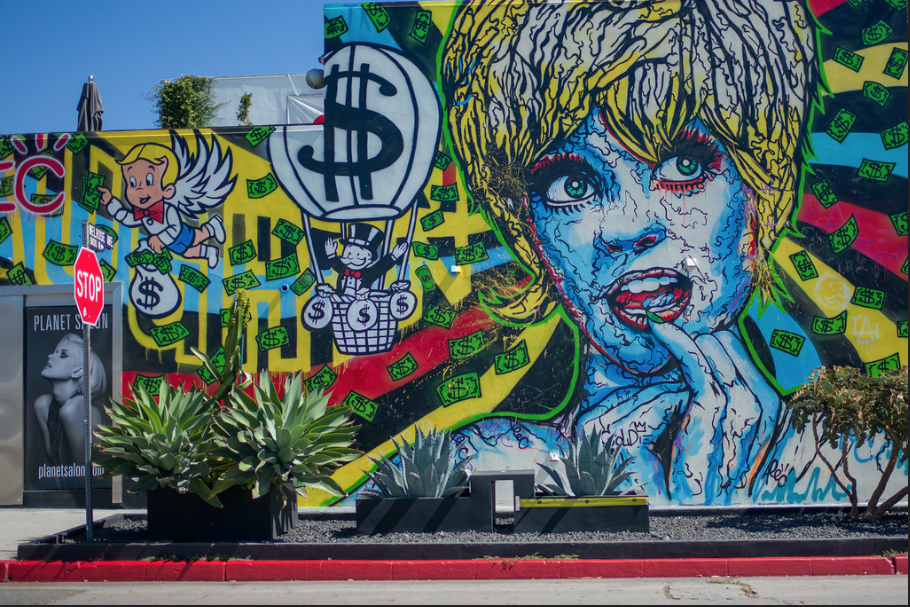 If the L.A. River could be considered the backbone of the city; Melrose Avenue is one of its pulsating arteries. The essence of this street could be defined in one single word – excess. There is just too much of everything: hoards of over-heated, sunburnt, clueless tourists; an infinite sea of traffic lights; stores and cheap souvenir shops; and of course a separate homeless nation. Here you will have to look a little closer and make an effort to tune out all of the screaming visual noise to be able to see the actual art. Surprisingly, all of the more recognizable works are done by the street art sanseis like Obey, Alec Monopoly, Morley and even the almighty Banksy, are not lost but quite harmoniously integrated into their hellish surroundings. So grab your patience, find your Zen and go on a treasure hunt of sort; don’t hesitate to look up or even under your feet, you never know where the next jewel might be. 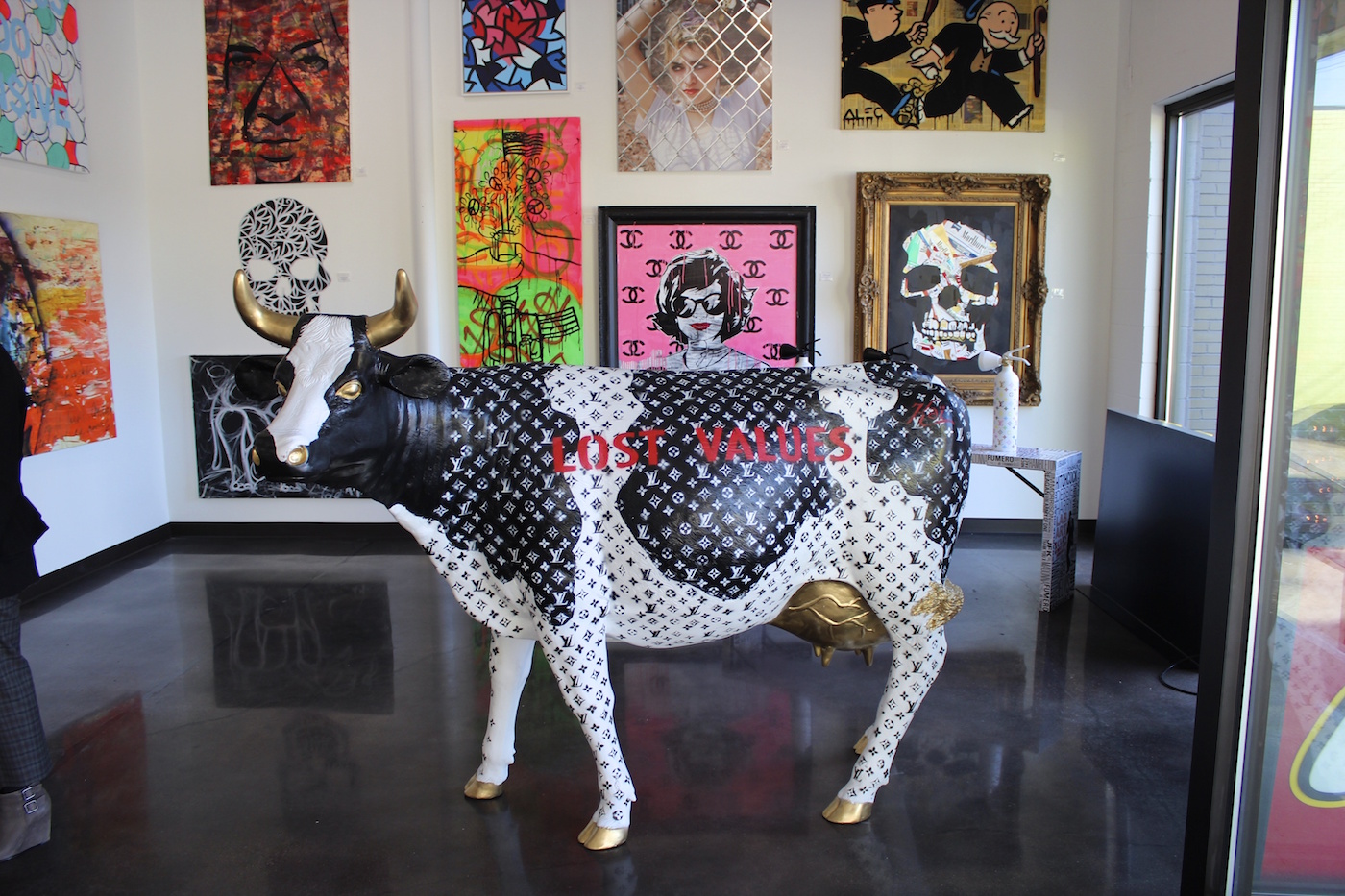 Today it is the largest art gallery dedicated to street art and graffiti in the United States. For a true admirer of the street art world this enormous space will be what Dunkin’ Donuts is for any sweet tooth, even if you are not hungry you won’t be able to resist a peak inside. You can check the gallery’s website for the schedule of all upcoming events (new exhibitions are opened quite regularly), for those who just can’t leave empty-handed, there is a shop where you can purchase a few reproductions of iconic works by artists like Alec Monopoly or even an original painting by Bryden Lando. For a kitschier taste, ready for war consumerism-hating Mr Debonair presents here curious creations like a Ferrari grenade or a Chanel machine gun. 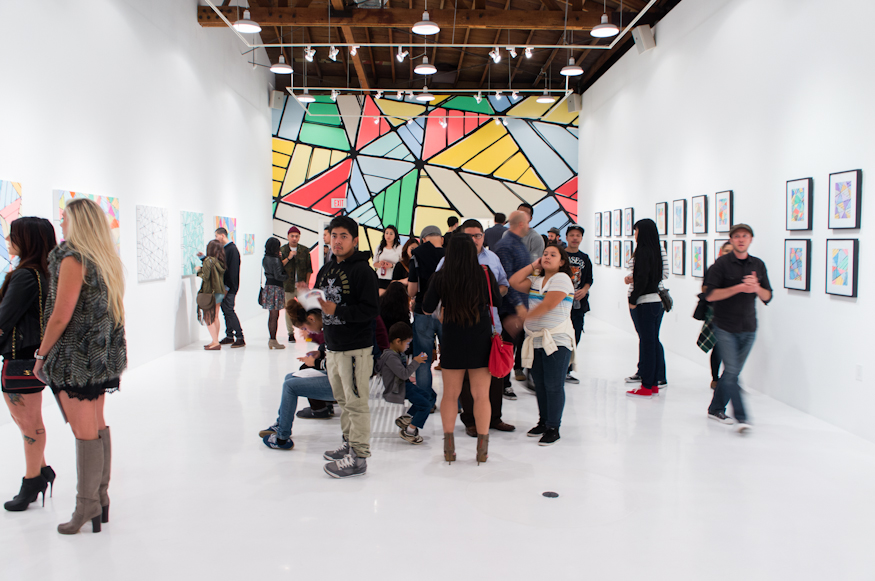 This platform’s showcases are mainly contemporary pieces by both new and already established artists from around the world. The gallery’s hook is that some of the works on display can and will only be seen here and nowhere else. This is explained by how some of the artists are simply too young, bold, and too out of the box to be aligned with any mass-markets, art dealers, or buyers, and certainly not with any auctions. The atmosphere inside is always full of life, fun and ease. So, if you are looking to soak in pretentious silence, you are in a wrong place. A usual crowd is extremely relaxed, tanned girls, in barely-there shorts, who are studying the surroundings with a dreamy gaze; while small groups of reggae-haired boys are standing stupefied in front of something large and colourful. Some might even say that the curators went a little overboard with the amount of presented materials. A small yet quite smart and stylish detail worth mentioning is how one of the main walls of the gallery is often repainted to match the style and theme of each new show. 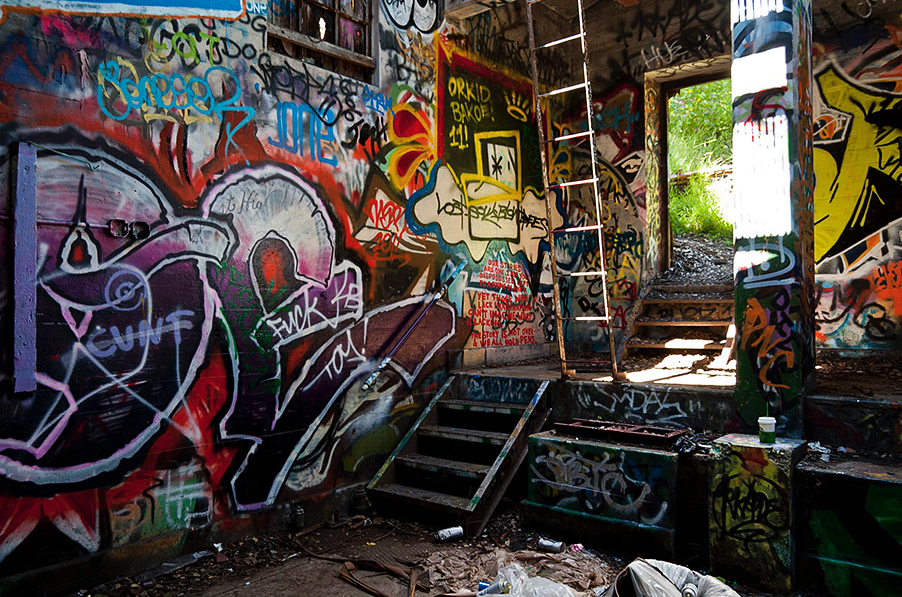 While a word ‘ranch’ sounds innocent enough, this particular one is actually an abandoned Nazi compound built in 1933 by fascist sympathisers of the Silver Legion of America. The day after the Japanese attack on Pearl Harbor, local police occupied the compound and detained around 50 members residing inside. It has stood empty since, decaying slowly over the years. Its walls were rediscovered once more when street culture began to blossom and artists searched restlessly for new, untouched surfaces. Today there is a slightly apocalyptic feel to the place, graffiti upon graffiti, every image overlapping, merging and creating new forms and visual stories. 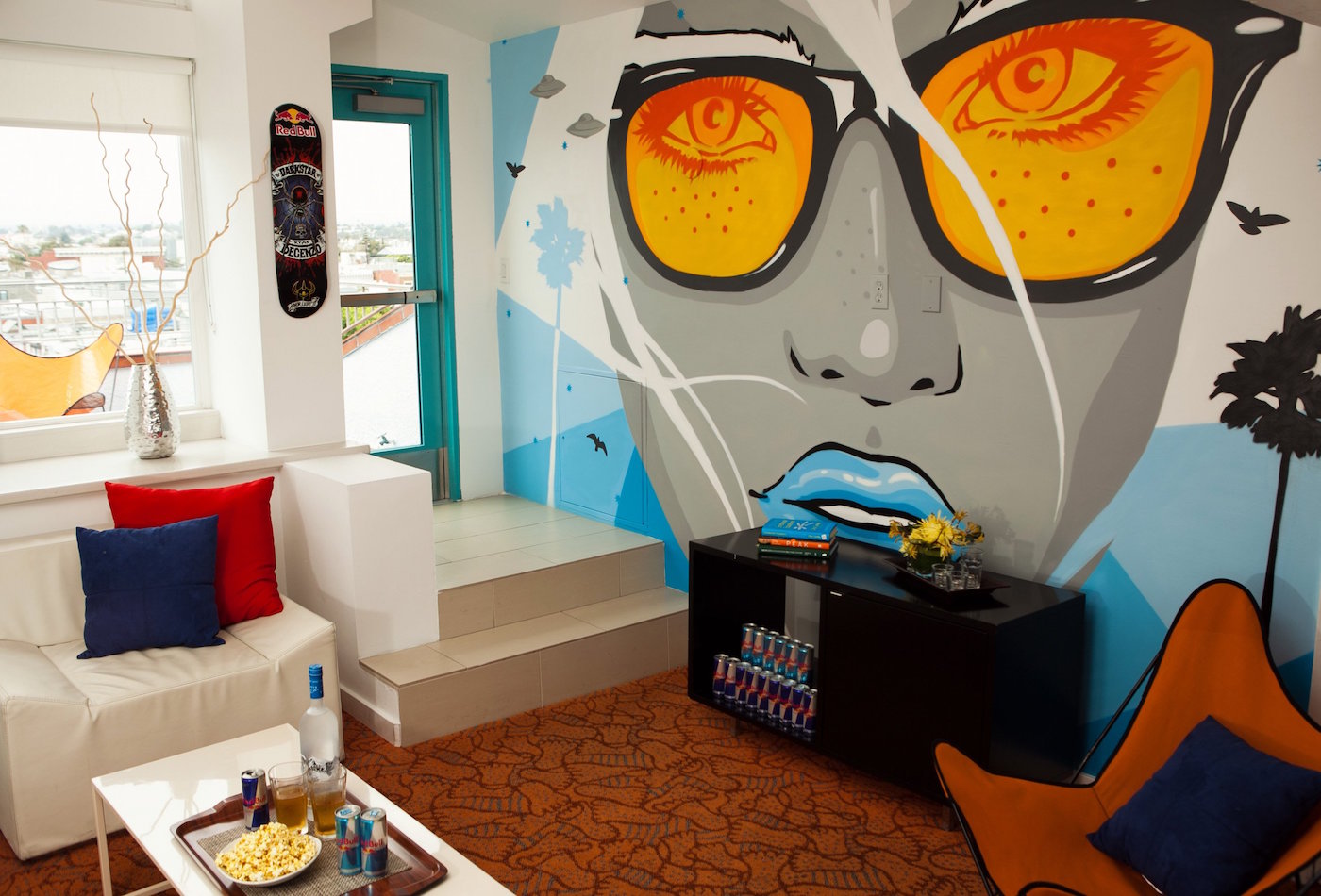 Hasn’t everyone heard about “Erwin”? Over the years it gained a reputation of one the most hip and modern hotels in Los Angeles that attracts guests from all over the States. It is so popular that a gigantic neon sign “Fully Booked, always and forever” might as well be flashing on top. Jokes aside, you really should book your room way, way in advance; like seriously - plan way ahead. Although, your temporary home can have graffiti painted walls and you - a chance to have a fence made entirely out of surfing boards serve as your holiday photograph backdrop. And who doesn’t want to meet the sunrise on the loudest rooftop of the city. 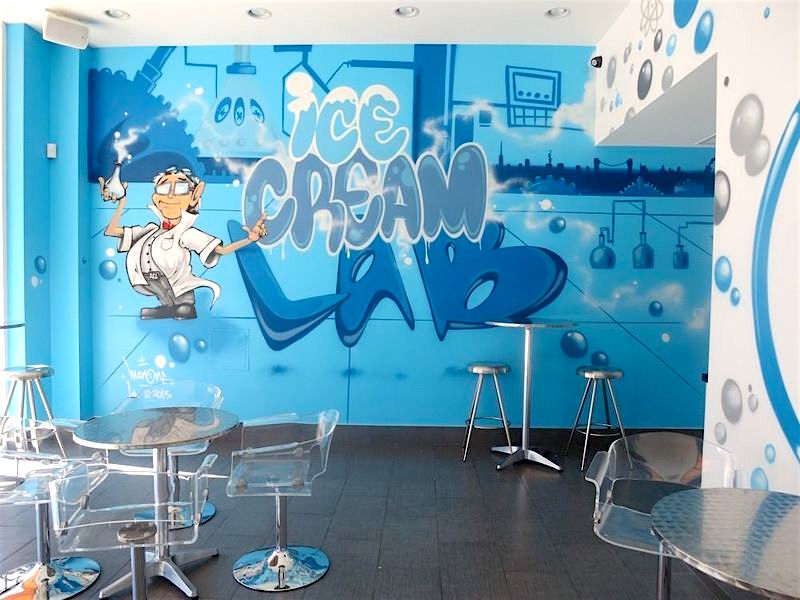 This graffiti-lined pit stop has the means to satisfy even the coldest of hearts, and it doesn’t matter what you came for, be it an ice-cream, or a scene. The staff here are all dressed in white lab coats, liquid nitrogen smoke comes at you from every direction, something constantly bubbles and sizzles, and all of your senses become highly alerted. A simple interior is decorated in cool winter tones, mostly blues, greys and whites. The graffiti here has a very distinctive playfulness to it and a touch of naiveté, traits common in the works of the L.A.’s favourite Man One. Speaking of everyone’s favourite – order Blue Velvet. It is a sandwich with their trademark blue filling, it has so many calories, a part of you will probably die a little, but trust us, it is so worth it. 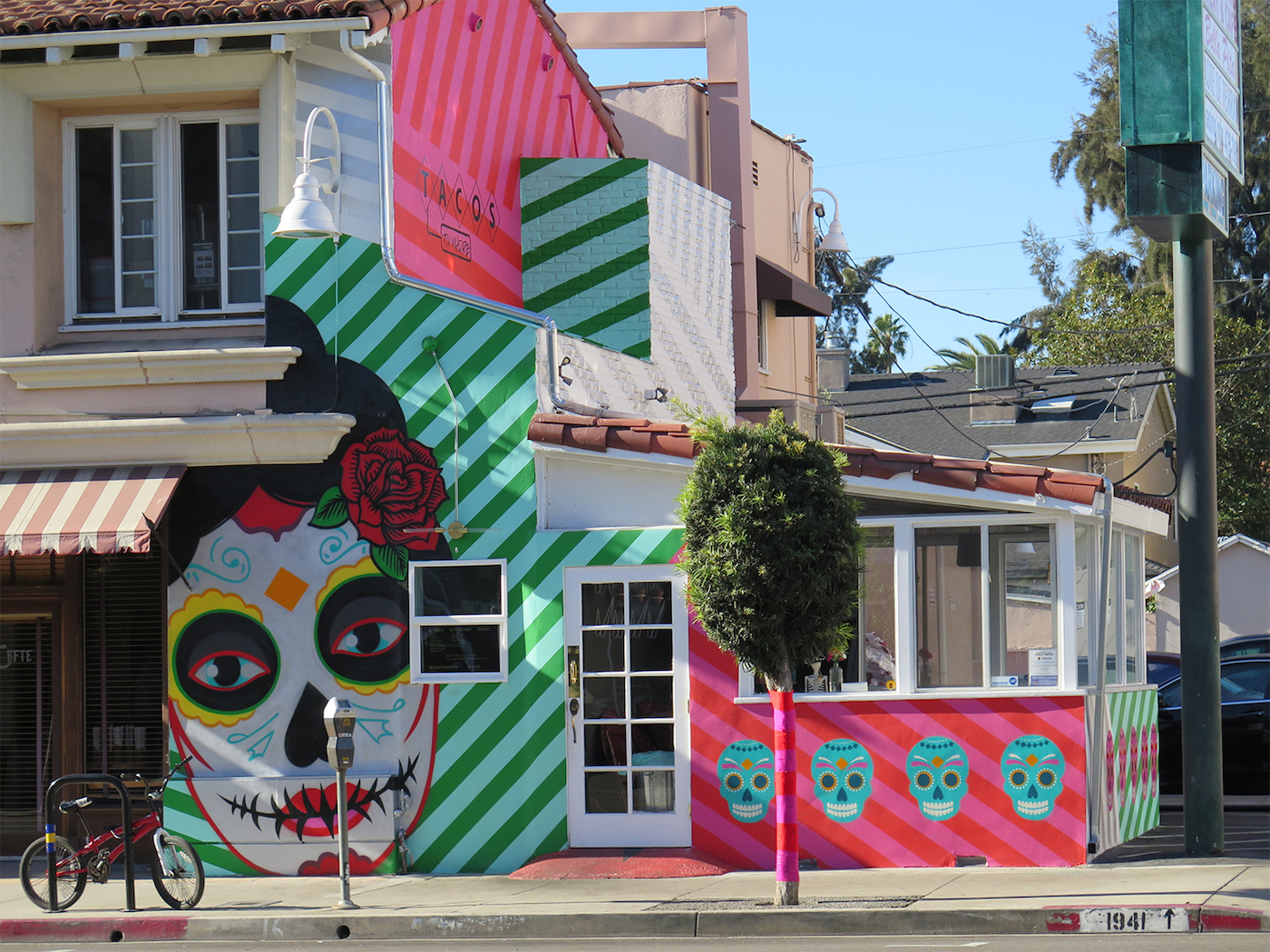 A bland taco? Never heard of it. In cosmopolitan Westwood even the simplest Mexican café will be transformed into a self-sufficient city art venue, with acidy skulls and multicolour zombies wearing sombreros. Art of Chase is the man responsible for painting the walls in eye-twitchingly bright colours. Although the artist’s works are known for being very Latin American inspired, the artist himself is actually Los Angeles born and raised. This place is also a nice change from many similar establishments. Here, when you get tired or bored from looking around at all the gripping design elements, you can actually sit down and have an equally impressive meal. Do try those tacos. Or a burrito. Just order both, you won’t regret it! 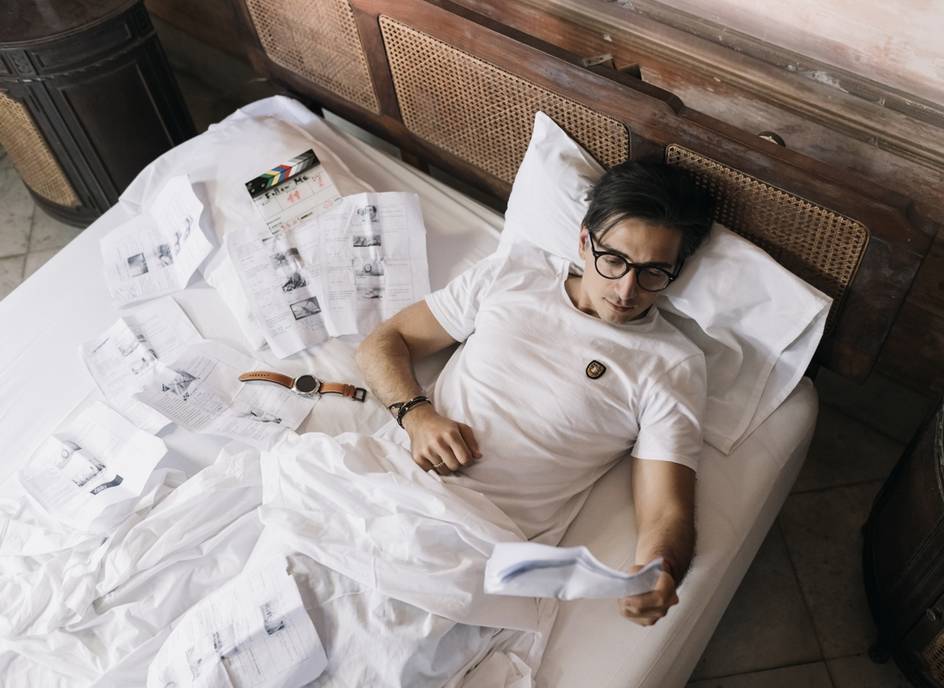 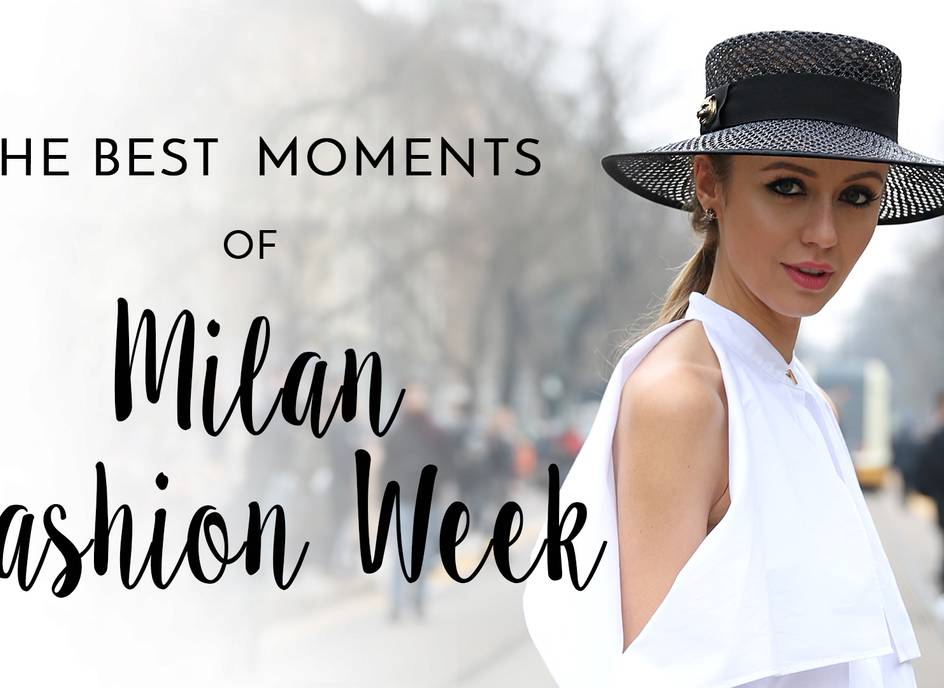